Grouping orders by SKU can save picking time, speed up fulfilment

A system for automatically combining e-commerce orders by SKU during fulfillment can result in faster picking times, a group of researchers from The Hong Kong Polytechnic University found after working with a Hong Kong-based logistics provider to implement such a system.

The researchers created a system that automatically grouped orders with SKUs that were physically close to one another in the warehouse. By grouping this way, pickers could go and retrieve multiple orders at once, cutting down on the walking required and speeding up the process. Previously, the logistics company had been picking each order individually, the paper said.

According to the researchers, the new system slightly increased the amount of time spent on order planning, as the logistics company went from doing none at all to an average of just under 30 seconds per order. But this increase was more than offset by the drop in picking time, which went down from nearly seven minutes to just over one. 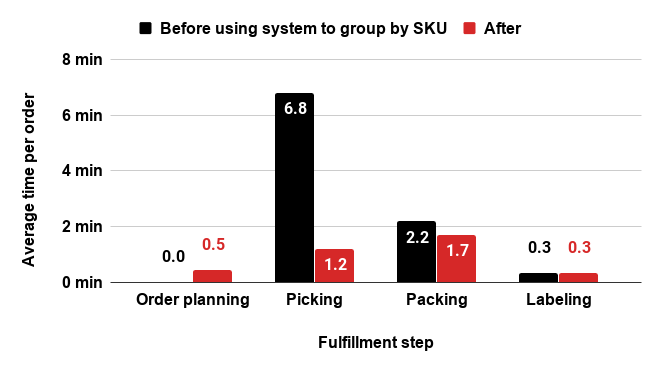 The cloud-based system developed by the researchers in Hong Kong considers not just the location of items within the warehouse, but also the item’s weight, the travel distance between the bins it will be grouped with, and any equipment needed to pick the item.

“Logistics service providers no longer perform e-order fulfillment operations immediately after orders are received online,” the case study found. “Instead, e-orders, which are placed by B2C customers from various online sales platforms, and usually small in lot-size, are consolidated in a cloud database for further order grouping.”

Before using this system, pickers at this facility would travel an average of 68 meters per order. Once the grouping system was put in place, this distance dropped to just over 13 meters.

This process of grouping orders together is sometimes referred to as “batching” and is just one way warehouses are looking to increase the efficiency of their operations. Deciding how to create these “batches” is a complicated process and has been the focus of a lot of research, according to research by Nils Boysen, a professor at University of Jena, and other researchers in “Warehousing in the e-commerce era: A survey.”

Orders from customers paying for faster delivery should be given priority, but batches should also be optimized to ensure each order included is set to be delivered in close proximity to the others in the batch. Different researchers have found different ways of dealing with trade-off, including finding ways to batch more urgent orders, and multiple route-planning algorithms have been developed for this purpose, according to Boysen.

But some warehouses are trying to cut out walking entirely for pickers. Amazon, for example, has brought in its shelf-moving Kiva robots to bring orders directly to pickers

Why ‘Made in Vietnam’ won’t replace ‘Made in China’?

Emirates Will Resume Flights To Nigeria And Jordan This Week

How Ships Could Produce an Unlimited Amount of Their Own Fuel