The total insurance bill from the ONE Apus box spill this week is set to top $50m. More than 1,900 containers – including around 40 boxes containing dangerous goods – tumbled into the Pacific Ocean on Monday as the Japanese boxship encountered a violent storm cell en route to America.

The Ocean Network Express (ONE) ship has now turned around and is headed to the Japanese port of Kobe, set to arrive on Tuesday. Fortunately no crew were injured during the storm and the heavy rolling of the magenta-coloured ship.

“Once berthed, it’s expected to take some time to offload the dislodged containers that remain on board. Then a thorough assessment will be made on the exact number and type of containers that have been lost or damaged,” ONE said in its latest update on the accident.

The accident is the worst loss of boxes at sea since the MOL Comfort sank seven years ago. The annual average number of containers lost at sea around the world for the years 2017 through 2019 numbered 779, according to the World Shipping Council, providing some perspective on the scale of Monday’s accident.

At an average FOB value of $25,000 per box, according to estimates from Singapore’s CTI Consultancy, the cargo claims are set to be in the region of $47.5m, while other items such as off hire and repairs will ensure the insurance bill tops $50m. The ship is insured by the Japan P&I Club with its cargo insurance also coming from a Tokyo-based insurer.

The US Coast Guard yesterday issued a warning to Hawaii mariners as a precautionary measure to ensure vigilance when far out to sea.

A sistership, ONE Aquila, suffered a similar accident on October 30 this year, also while en route to Long Beach. The ship lost around 100 containers and diverted to Tacoma and had a few days of repairs before rejoining ONE’s network on November 11. Both the ONE Aquila and ONE Apus were built at Japan Marine United’s Kure shipyard.

In March last year, another ONE vessel, the 8,614 teu Helsinki Bridge, also lost a number of containers overboard while heading from Boston to Wilmington in the US. 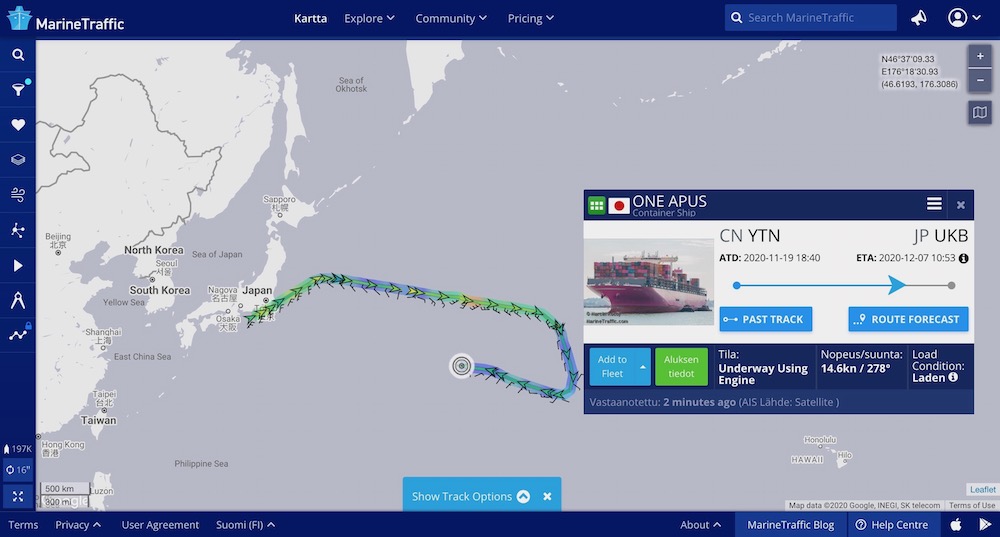 How has Russia changed the world energy map?