How the Panama Canal traffic jam is affecting ocean shipping

Since the Panama Canal debuted its larger Neopanamax locks in 2016, the three heaviest users have been container ships, liquified natural gas (LNG) carriers and liquefied petroleum gas (LPG) carriers. Now, transit demand for all three segments is simultaneously surging. On top of that, COVID issues are reportedly affecting canal operations.

The consequence over the past month and a half: transit delays.

The good news for containerized cargo shippers is that container lines have reserved booking slots. The delays are affecting ships without reservations.

The good news for LNG and LPG shipowners is that delays are actually a tailwind for returns. Every day a bulk-cargo ship is stuck waiting at anchorage off Panama is a day less it can vie for spot contracts at the end of its voyage. Less competition equals higher rates.

Panama Canal congestion is also spurring more LNG and LPG carriers to take the long route to Asia around the Cape of Good Hope. Longer voyages soak up more vessel capacity, another plus for rates.

During the latest call of Oslo-listed Avance Gas, the company’s chief commercial officer, Ben Martin, partially attributed delays to “the COVID effect of lack of crew to be able to manage the tugboats, which limits the number of transits.” Those comments were subsequently reported by Argus Media.

FreightWaves asked the Panama Canal Authority (ACP) for comment on reports of COVID-related issues impairing operations. It disputed reports of tugboat staffing issues and insisted that its COVID-19 safety measures have allowed operations to continue safely without interruption.

Asked about causes of congestion, it cited a confluence of higher container traffic and LNG traffic. “Like at many ports around the world, we see this as a temporary situation driven by the effects of the pandemic [on consumer demand].”

The ACP also blamed the weather. “Hurricanes … delayed shipments that then arrived at the Panama Canal simultaneously,” it said. It added that Panama is at the end of its rainy season “and there have been more days with seasonal fog than last year.”

The ACP asserted that its operational adjustments have now reduced delays. “The waiting time for vessels without reservations is five to six days on average, down from 10 days in mid-October,” it reported.

So far, so good for container ships

In the container sector, the spotlight has been the booming trans-Pacific trade from Asia to the West Coast. But there are also heavy flows from Asia moving to the East Coast via the Panama Canal. With all the delays at California ports, the last thing container shippers need is delays on the canal.

According to the latest available statistics, 137 container ships transited the Neopanamax locks during the month of October. Including all ship types, there were 315 transits via the larger locks. That’s the highest monthly tally since these locks opened — despite the congestion that began that month.

FreightWaves asked Maersk and another container-industry source whether they saw any canal delays affecting schedules. Both reported that so far, they did not.

According to Maersk, “No issues [have been] reported and we are not experiencing any delays on Panama Canal transits if vessels are booked on time, which means that we must book 14-21 days in advance, depending on ship size.”

According to Clarksons Platou Securities, spot rates for very large gas carriers (VLGCs; LPG carriers with a capacity of 84,000 cubic meters) have spiked to $77,200 per day, with U.S.-Asia rates at $80,800 per day. These are the highest rates in a half-decade. VLGC owners like Dorian LPG (NYSE: LPG) stand to benefit.

VLGC rates are being driven by strong exports from the U.S. to Asia, a switch in India to more sourcing from the U.S. as opposed to the Middle East (dramatically increasing voyage length), and Panama Canal transit delays.

According to Cleaves Securities, “Our satellite data shows that eight VLGCs [were] awaiting Panama Canal transit as of Monday morning, with an average waiting time of around 2.8 days. This is down from the 3.8-day average in October, but up from the 1.7-day average between May and August.” 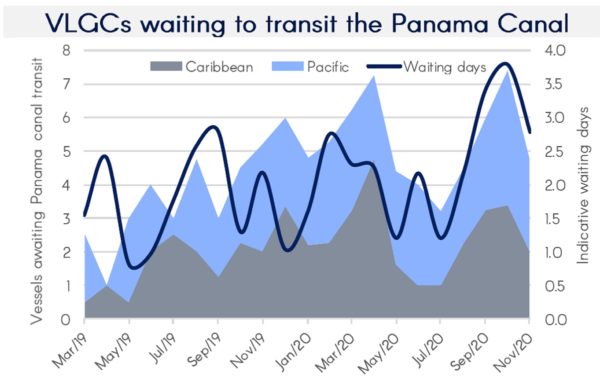 “With some vessels now using up to nine days to transit the canal — normally around two days — many opt for the 12-day-longer voyage around the Cape of Good Hope,” said Cleaves.

Argus Media reported last week that “some shipowners are avoiding delays by taking the longer Cape route [which] adds significant ton-miles and further stretches the fleet.”

The same pattern is being seen for U.S. LNG exports to Asia: canal delays, diversions and high rates.

According to Clarksons, spot rates for M-type, electronically controlled, gas injection (MEGI) LNG carriers are currently $123,000 per day. It attributed the high rates to “stronger demand, export facility disruptions and delays at the Panama Canal.”

Argus reported, “Some sellers have opted to deliver U.S. cargoes to the Pacific via the Cape of Good Hope instead of the Panama Canal, which adds around 10 days to the journey. [That] could mean that some cargoes may arrive in northeast Asia in the second half of January instead of in the first half of the month.”

At FreightWaves’ request, commodity intelligence company Kpler ran the numbers on Panama Canal congestion for both LNG and LPG vessels, using ship-positioning data. Kpler looked at the weekly capacity of gas carriers with extended delays. It tracked ships that were stationary for seven to 15 days prior to transit.

The data reveals that delays for both vessel categories are much higher than they were at this time last year. It also shows that LPG shipping delays substantially improved in November, but delays for LNG carriers got worse.

While the ACP said that average waiting time for ships without reservations has halved over the past six weeks, Kpler’s ship-positioning data tells a different story, at least when it comes to LNG vessels.