How giant ships are built

Almost everything at this American shipyard exists at enormous scale. Vessels are constructed over years. Experience is developed over decades. The work is so spread out across the yard and over time that, to the untrained eye, it can be difficult to tell what is being hammered, wired or welded — and whether it’s right-side up or upside down.

When finished, more than a hundred pieces are fused into a hulking mass of metal that will be set afloat to connect an ever-shrinking world. 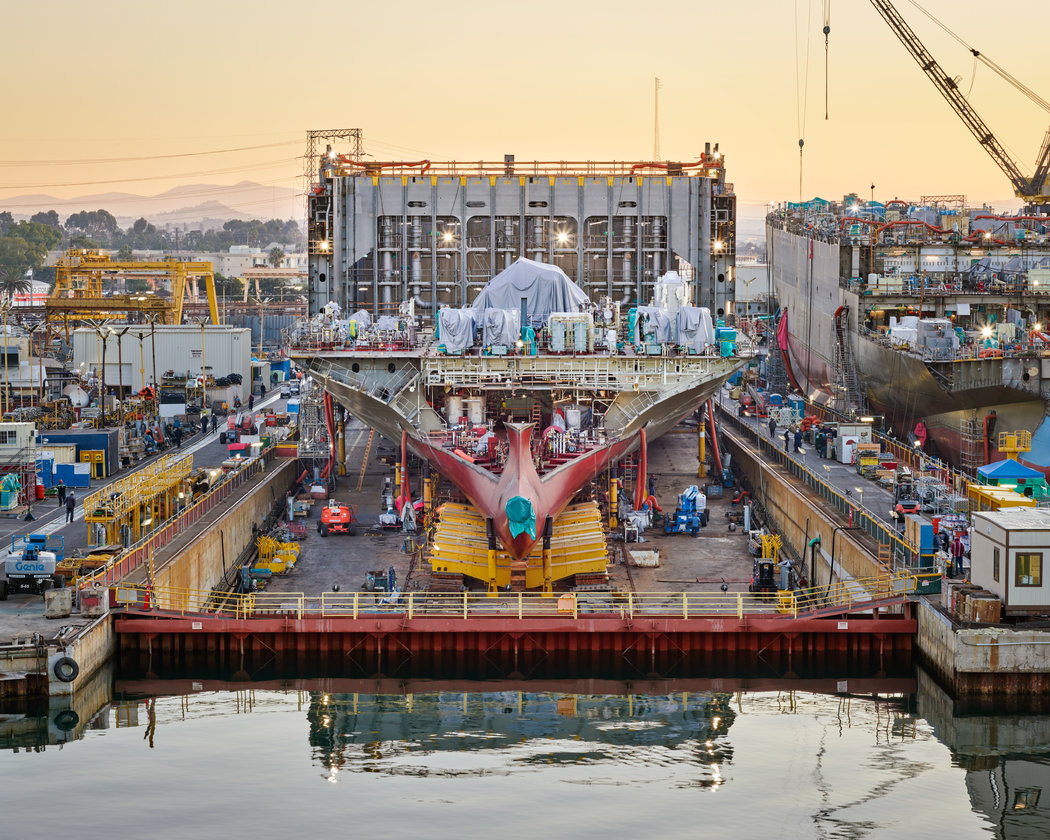 Large container ships play an almost incalculable role in the modern economy, responsible for delivering the vast majority of the products we buy. They make up a circulatory system that carries more than 90 percent of all traded goods.

Shipyards, like this one in San Diego run by General Dynamics NASSCO, keep those vessels moving.

Typically, the manufacturing process begins at the western end of the yard, where thin steel plates lie in stacks. The plates, longer and wider than a city bus, are welded and cut into panels. The panels, in turn, are twisted and shaped into the skeleton of the ship. This ship under construction is the Matsonia. Four years ago, Matson, a transportation logistics company, signed a half-billion-dollar contract with NASSCO to build it and an identical one.

But not all container ships are the same. These two were designed to carry both cargo containers hoisted aboard and cars and trucks driven into the ship’s garage. Matson designated them “Kanaloa class” vessels, a reference to an ocean god in Hawaiian mythology and a wink to their eventual purpose: ferrying items to and from the island state.

As container ships go, the Matsonia is modest in size. But size is relative in shipping. Once it is seaworthy, likely by the end of the year, the Matsonia will stretch the length of more than two football fields and be capable of carrying thousands of 20-foot-long containers and 500 cars and trucks — as much as 57,400 tons of cargo in total. 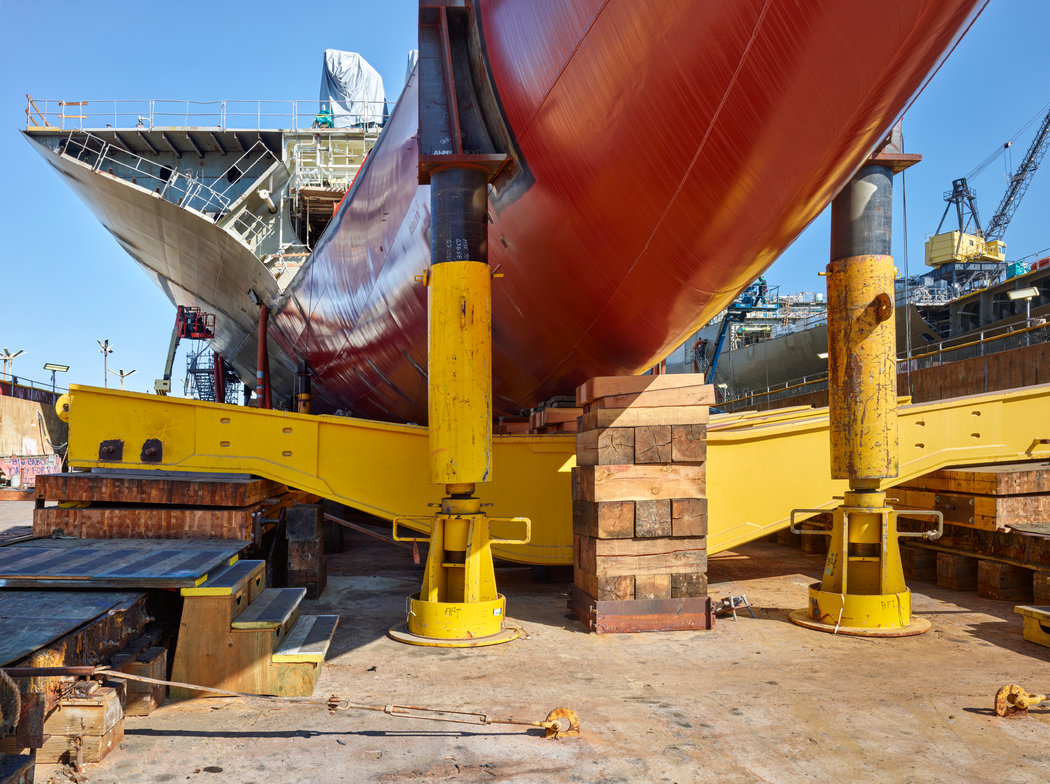 In the United States, large shipyards have been on the decline for decades, losing out on orders for massive commercial ships to cheaper foreign competition. Today, more than 90 percent of global shipbuilding takes place in just three countries: China, South Korea and Japan.

The Port of New York and New Jersey takes in more imported goods than any other in the United States. The Port of Houston exports the most.
What industry does remain in the United States is supported by the federal government, which orders American-made ships of all kinds, from Coast Guard cutters to naval aircraft carriers. The industry is also protected by a century-old law, the Jones Act, which requires that people and goods moving between American ports be carried on ships owned and operated by U.S. citizens and built domestically.

The federal involvement has helped to preserve the vitality of the 124 remaining active American shipyards, which, according to government estimates, contribute more than $37 billion in annual economic output and support about 400,000 jobs.

That’s because despite the scale of the yards and immensity of the ships, much of the work happens at human scale. 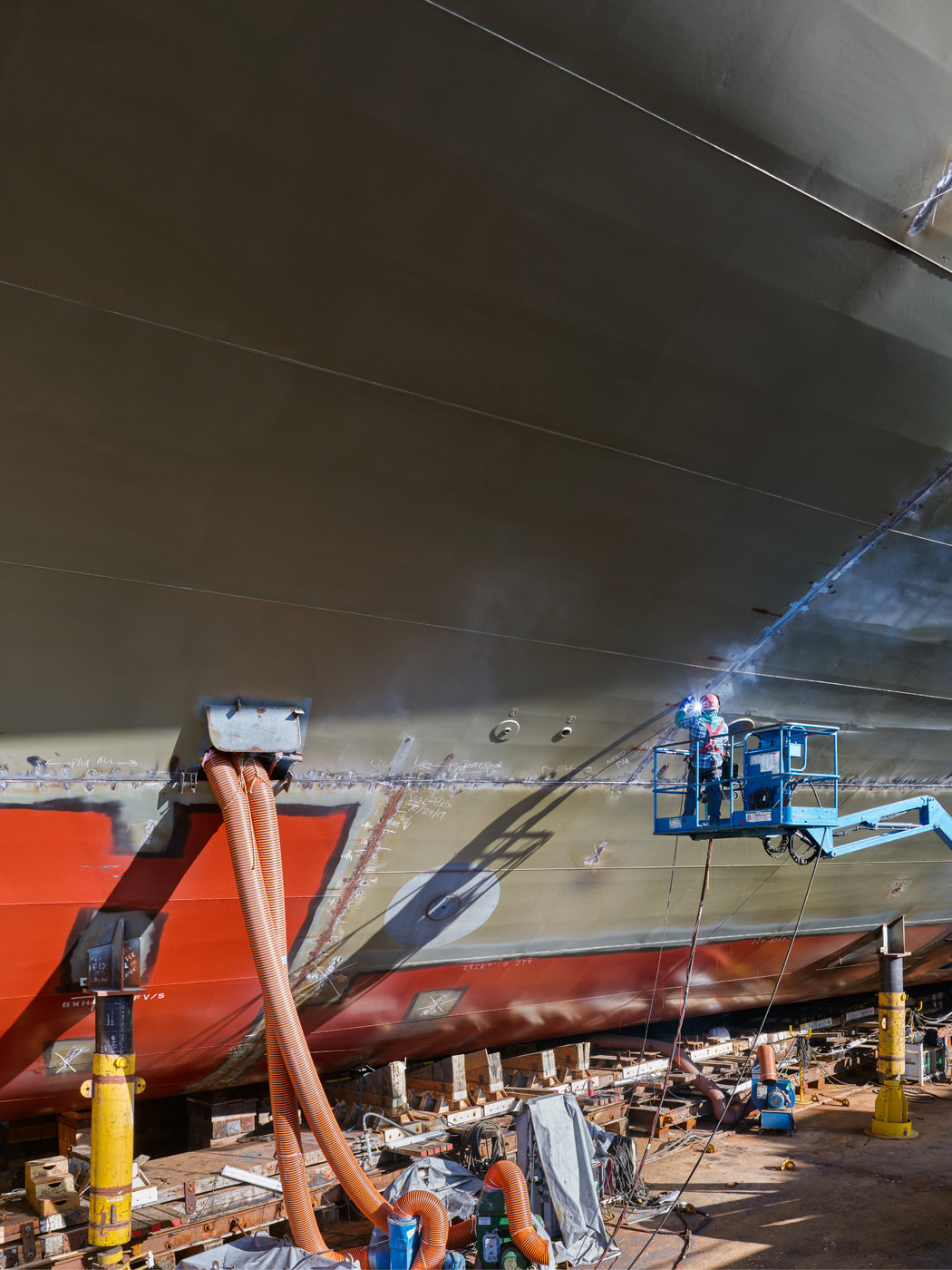 NASSCO, which has been operating a few miles from downtown San Diego for nearly 60 years and became a division of General Dynamics in 1998, produces both commercial and military ships. There are often multiple being built or worked on at any given time, including this Navy assault vessel below, which was undergoing maintenance late last year. 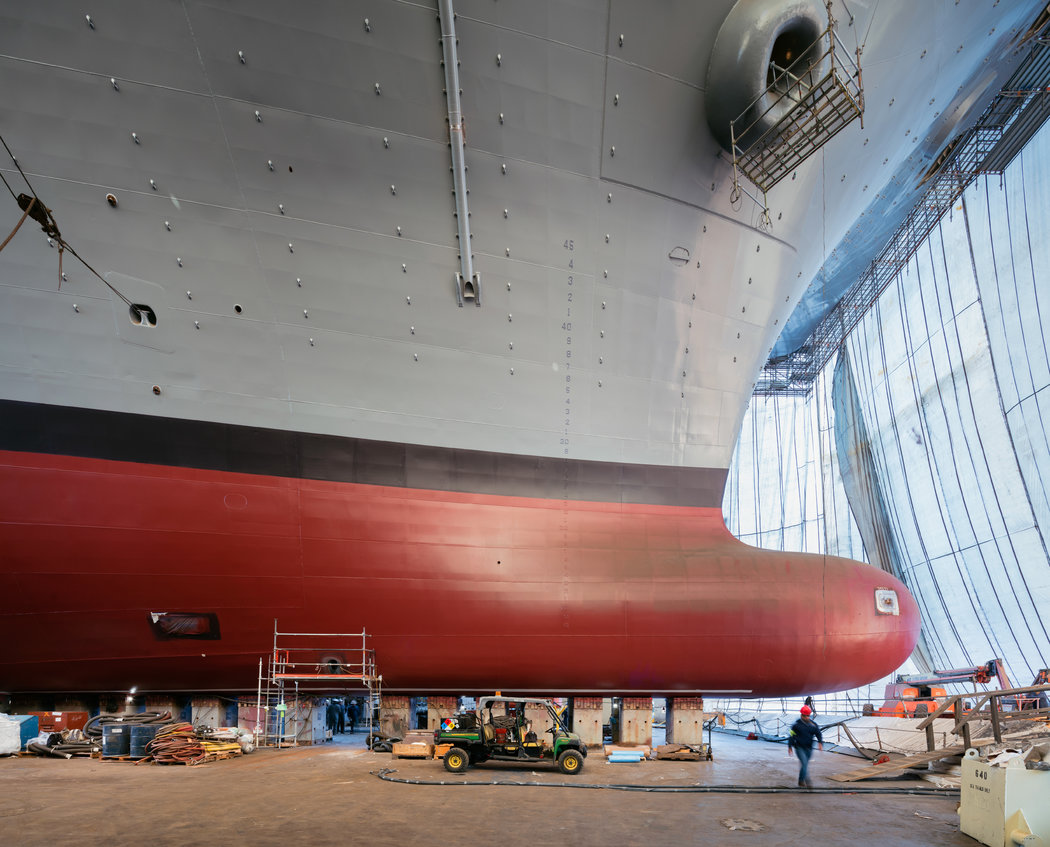 The work here never stops, even during a pandemic.

Considered an essential business, especially because of its government contracts, NASSCO didn’t halt its operations as the spread of the coronavirus forced workplaces to close and communities to carry out shelter-in-place measures.

Instead, the company found ways to follow new safety protocols and social distancing. Worksites were cleaned more frequently, and hand-washing stations popped up across the yard. Some processes were altered to allow for fewer close interactions among the workers.

And even as the virus shut down much of the world economy, people continued to buy things, which meant that global shipping never completely stopped — nor did the job of making the ships. A typical commercial ship takes NASSCO about three years to complete, including roughly 12 to 16 months of detailed design and planning. Construction of the Matsonia began in 2018.

The first few stages of construction focus on building out the structure of the vessel, in pieces. The panels are created and shaped into so-called blocks, chunks of the ship’s body that can weigh dozens of tons.

About 11 billion tons of goods are transported by sea each year.
The blocks are then blasted and painted before entering the final stages of outfitting, where they are filled in with equipment, cables and piping. Sometimes, the blocks are turned upside down because the work is easier to perform facing the ground.

The pieces are then assembled into bigger “grand blocks” and, ultimately, into the ship like the Matsonia. 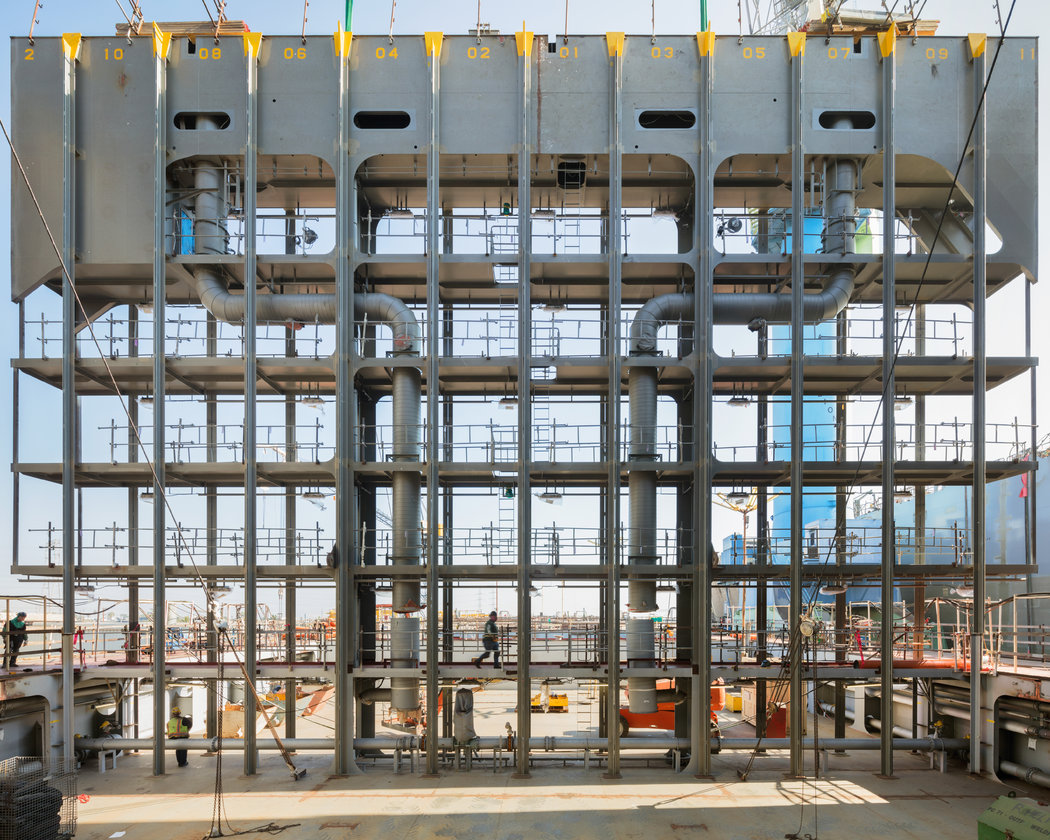 When complete, the Matsonia will begin making the more than 2,000-mile trek between the continental United States and Hawaii.

Hawaii relies disproportionately on trade. An estimated 88 percent of all food in the state is brought in. Each year, nearly 13 million tons of cargo arrive by sea, according to Eugene Tian, the state’s chief economist.

That equals about 220 trips by a packed Matsonia.

“Ocean transportation is a vital component of our economy,” Dr. Tian said. “Without it, I don’t think our people would survive and our visitors wouldn’t be coming here.” At the NASSCO yard, the pieces of the ship are moved from one staging area to the next by giant cranes affixed to a network of rails or on wheels. (The two largest cranes, named Logan Lion and Big Dipper by a pair of elementary school students in a contest, can lift a combined 600 tons.) 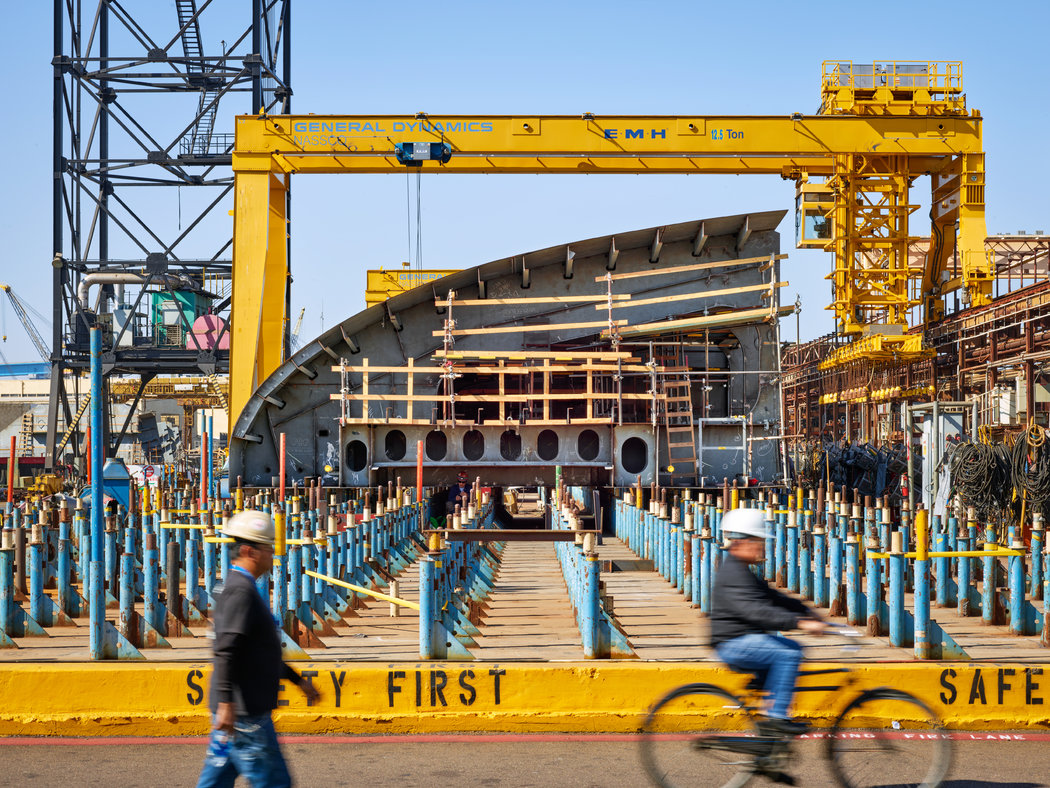 The shipyard is open day and night, year round. Workers on the first and second shifts of the day carry out most of the construction, operation and quality assurance. Those on the overnight shift generally perform maintenance on equipment across the yard or move the blocks from one staging area to the next for the coming day’s work. 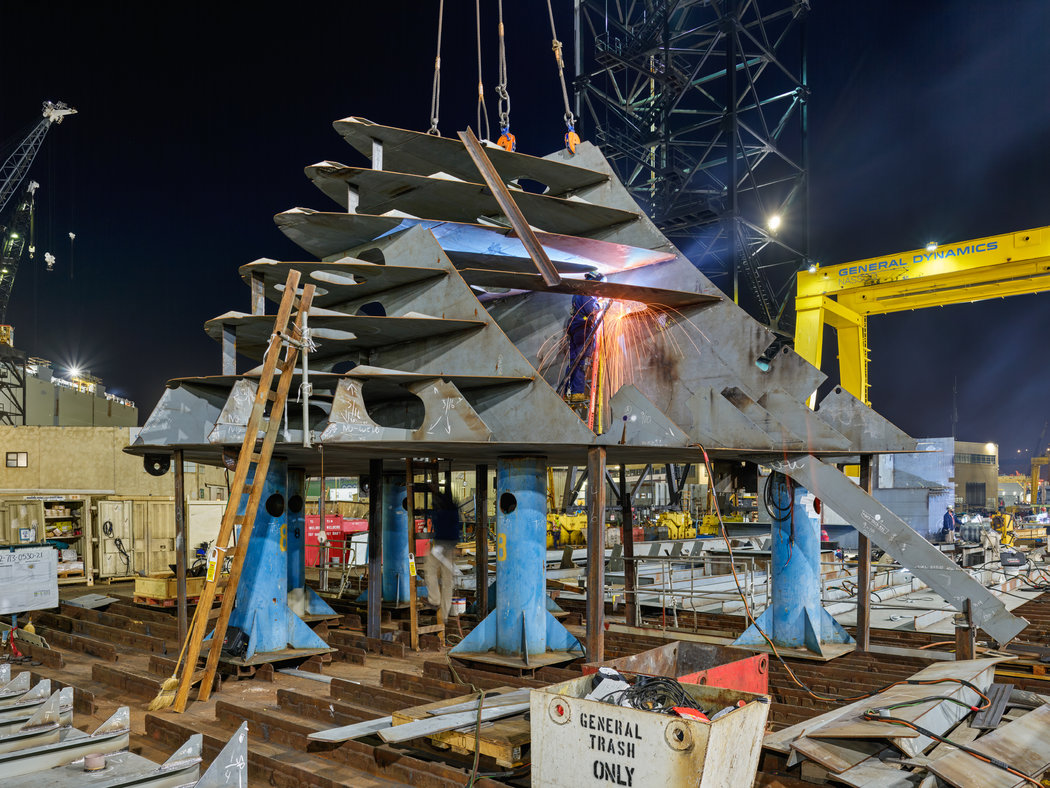 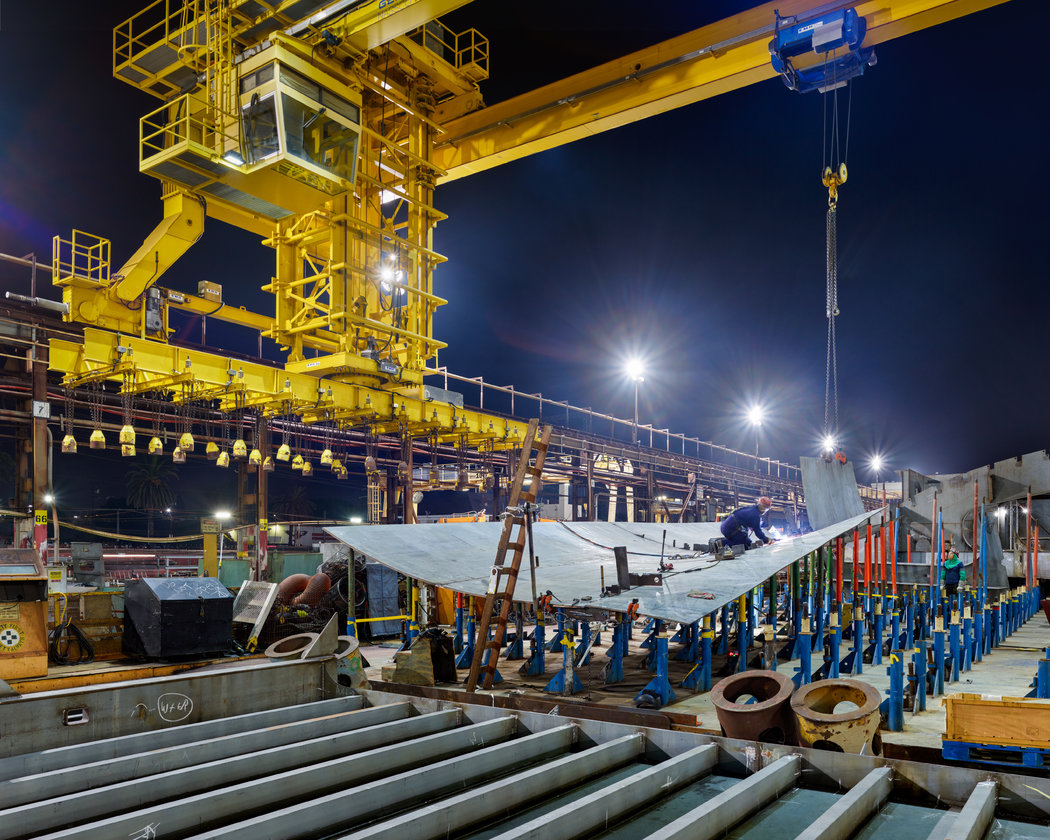 Once a vessel is mostly complete, it is launched into the water, where finishing touches are applied, like the installation of any remaining equipment, and all of the vessel’s systems are tested. The ship can then begin its life as an engine of global trade.

If all goes according to plan, the Matsonia will slide into the water in the coming months to begin ferrying goods to Hawaii before the year is over. 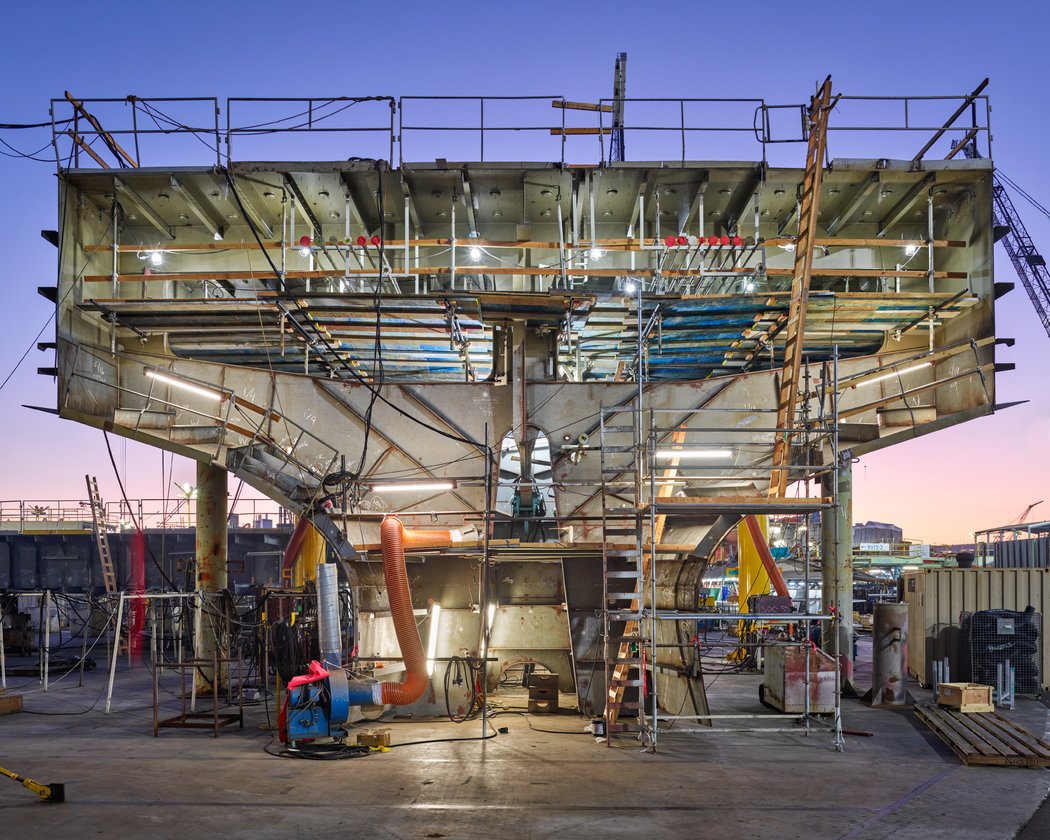