Container Volumes Shipped to the U.S. Surge After Coronavirus Downturn

Container imports are flowing back into the U.S. after a six-month hiatus, with U.S. retailers knocked back by pandemic-driven lockdowns now stocking up before the holiday season.

The demand is filling up container ships across the Pacific and operators are restoring cargo-vessel sailings that were cut by as much as a third at the height of the pandemic closures from March to June.

August “will more than likely be” the best August in the history of the Port of Los Angeles, Gene Seroka, executive director of the port, the largest U.S. gateway for seaborne container imports, said this week.

Vessel bookings for the coming weeks suggest “September will be strong as well,” he said. “Retailers are currently restocking and redeveloping their inventories at their distribution centers and on their store shelves.”

The Port of Los Angeles said dockworkers there were handling 15 container ships on Thursday. In the spring, the average daily number of ships was about half that amount.

“Capacity from Asia to the U.S. West Coast is 25% higher than it was in May and around 7% on year,” said Jonathan Roach, a shipping analyst at London-based Braemar ACM Shipbroking. “We have seen a surge in short-term demand out of America.”

Shipping executives pin much of the rebound on e-commerce.

“The service industries are still paying the price of the lockdowns but there is a surge in online shopping,” said Mikkel Elbek Linnet, a spokesman for Denmark’s A.P. Moller-Maersk A/S, the world’s biggest container operator. “People may not go out for a drink, but they will spend money on a pair of sneakers or to get home appliances.”

The rebound in demand has pushed up freight rates. The spot price to send a standard container from Shanghai to California this week reached $3,758, a record price that has more than doubled from the start of this year, according to the Shanghai Containerized Freight Index.

The surge comes as retailers and manufacturers look to get goods in place for what they hope is a stronger fourth quarter and holiday sales season. Several merchants say they were hurt by stock shortages as states across the U.S. emerged from lockdowns over the summer.

“The stronger-than-anticipated demand as we opened our stores for shopping resulted in more constrained product availability than we expected,” Chief Executive Corie Barry said on a conference call to discuss quarterly results.

Trade-data-analysis company Panjiva Inc. said U.S. sales of household appliances soared 50% in the first half of the third quarter from a year earlier, while consumer-electronics imports rose 5% in the period. Imports of televisions by Best Buy rose 11% over the same period, Panjiva said.

“July was the best month since January,” said Sam Ruda, the port director at the Port Authority of New York and New Jersey. “E-commerce is dominant and August will be stronger. We see rising volumes coming in from the home goods stores like Home Depot and Lowe’s and from electronics retailers.”

At the facility overseen by Mr. Ruda, the largest container port on the East Coast, cargo volumes fell 7.9% in the first seven months of the year from a year earlier, including a 22% drop in loaded container imports in May. But the overall box tally jumped in July by 100,000 from the number handled in June.

Container volumes at the ports of Los Angeles and Long Beach rose by 24% and 21%, respectively, in July from June. Business at both ports had fallen by more than 6% in the first half of the year from the comparable period of 2019. 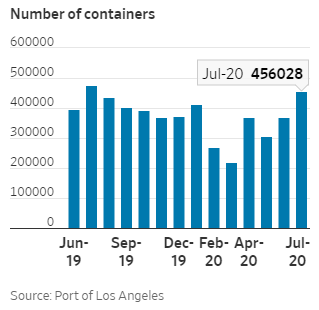 “The biggest pressure is on the West Coast, being the fastest way to get goods from Asia and get them onto the U.S. shop shelves,” said Nils Haupt, a spokesman for German shipping line Hapag-Lloyd AG . “All available capacity has now been deployed as retailers scramble to restock and this is driving the strong freight rates.”

Shipping executives caution of significant uncertainty in coming months. They say a virus resurgence in the fall could again rattle supply chains, especially as the impact of government stimulus aid winds down and if trade relations between Washington and Beijing remain strained.

Airbus and Boeing are about to face potential competitor from China