A container from China arrives in Narvik. It could pave way for a new transport route

It is quick and cheap and will open new markets, route developers say. This week, a first test container makes its way from China to the north Norwegian port of Narvik.

by Dandelion
in Rail

The shipping container was in mid-July loaded on a train in the Chinese city of Hefei. Less than two weeks later, it had made it through Kazakhstan and Russia, and all the way to Finland. In Helsinki, the container was sent north and then westwards across the border to Norway.

On the 4th August, a group of local logistics developers with eager greeted the load as it rolled into the port area of Narvik, the north Norwegian town and infrastructure hub.

This successful delivery shows that goods smoothly can be sent between Narvik and China and that a new northern transport route can be developed, representatives of the Narvik Seaport say.

We have what is needed, they argue, and point at the railway connection to nearby Sweden and Finland and the seaport that can handle large-size ships.

“There is a major potential for this route,” project coordinator Anna Filina says to the Barents Observer.

She believes various manufactured goods can be sent from China to Narvik, while Norwegian fish can be sent the other way. It will be of great use for business in northern Norway, she argues. Also companies outside the region, including from other parts of Norway, as well as countries such as the UK, USA and Canada, can benefit.

The test container that arrived in town this week is packed with furniture ordered by a local Norwegian company. Soon, more goods could follow.

“We now have to show that it works, that the route can be a reliable complementary alternative to the existing routes,” Filina says.

She is confident that customers will come as soon as the route is up running. The test container is transported by truck from Helsinki, but as soon as there is sufficient goods there will be train transportation all the way, the project coordinator underlines.

The scheme appears highly competitive. Rail shipments between Narvik and China takes 15-17 days, compared to 1,5 months with ships. And the price is low. According to the route developers, rail transportation is 30-40 percent more expensive than ship transportation and up to seven times cheaper than by air. 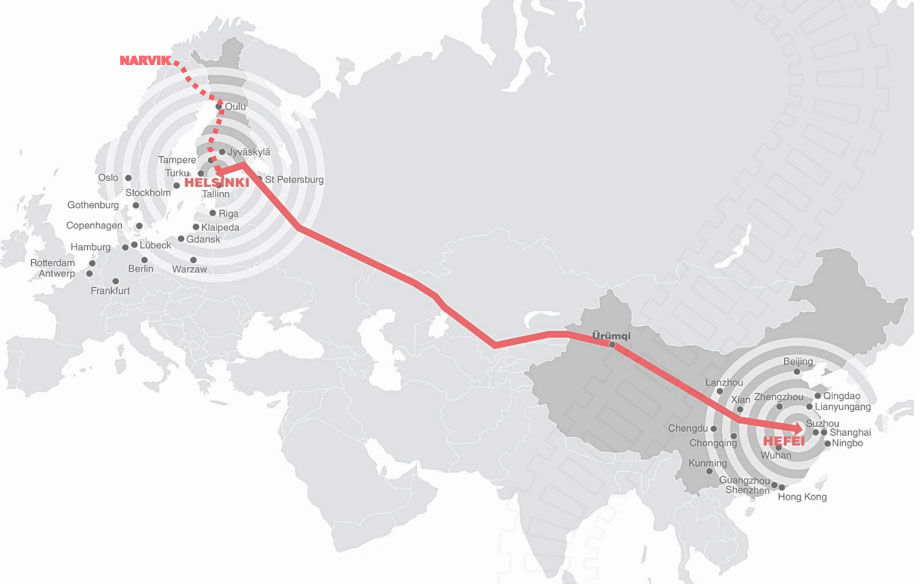 Onboard in the plans is Nurmenen Logistics, the Finnish company with long experiences in transportation through Russia. The Finns are already heavily engaged in east-west shipments to China and currently once every two weeks send trains on the route through Russia and Kazakhstan.

Currently, they bring mostly wood products, paper, and electronics. In the future, Norwegian fish sent in reefers might join the container trains that shuttle across the vast Russian and Kazakh steppe.

The Port of Narvik is also closely cooperating with the Kouvola Innovation Centre, a Finnish public logistics company developing transport solutions between Europe and Asia.

But the development of east-west logistical routes has not come without trouble. Politics have repeatedly put barriers in the way of trade and transport developers.

Only in December 2019 did Russia allow rail deliveries across its territory with goods that are included in its sanctions regime with the West. That removed an important barrier for rail deliveries between Europe and China. For now.

And in 2009, the Norwegian Nobel Committee’s decision to grant the peace award to writer and human rights activist Liu Xiaobo led to a full freeze in trade and cooperation between Norway and China.

Ragnar Krogstad, the development director at the Port of Narvik, recalls how his company was about to start rail deliveries between Narvik and China when the political earthquake between the two countries led to a full halt in activities.

This time, things appear to be heading towards greater success, he makes clear to the Barents Observer. The development of a path to Narvik as part of China’s great Belt and Road initiative appears closer than ever.

As rates fall and fuel costs rise, airlines without freighters are at a crossroads