An S7 Airlines flight across Russia almost met a grizzly end when a bear wandered onto the runway. Thankfully, the observant flight crew noticed the bumbling Baloo before it was too late and initiated a go around. The flight landed safely around 20 minutes later.

As reported in the Aviation Herald, the flight was on Monday, August 17th, and was traveling from Novosibirsk to Magadan, a distance of under 4,000 km requiring a flight time of around five hours. The aircraft pushed back around 30 minutes behind schedule, departing from Novosibirsk (OVB) without incident.

The aircraft operating the route was VQ-BRI, an Airbus A320neo less than two years old. It was delivered to S7 from Hamburg in October 2018. The aircraft made good time on the trip and was on final approach to the runway in Magadan just five minutes behind schedule.

The aircraft descended to around 500 feet above ground level, when the crew noticed something disturbing. The runway was already occupied. But it was not occupied with another aircraft; rather, there was a large bear in the way.

Thankfully noticing the bear before it was too late, the crew initiated a go around. The aircraft landed safely about 20 minutes later, the incumbent bear having cleared the runway by then. Had the crew not spotted the furry trespasser, the consequences don’t bear thinking about.

It’s not the first time Russia has had some issues with bears at the airport. In June last year, Yelizovo airport had to go into lockdown after a bear wandered into the facility early one morning. Despite a call for help to the animal rangers, the fuzzy felon was never apprehended. 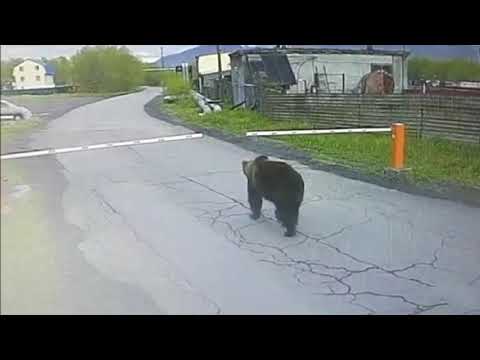 Animals on runways can be a serious issue for airlines, particularly those landing in more remote locations. Almost a year ago to the day, a Safarilink Dash 8 collided with a wildebeest on landing at Maasai Mara in Kenya. Thankfully the passengers and crew of the Dash 8 escaped unscathed, although the same cannot be said for the poor animal.

Around the same time last year, an AirAsia A320-200 had to reject its takeoff at the last minute when a dog ran onto the runway. The flight was departing from Goa, but there are around 20 Indian airports that have been identified as being at risk of animal incursions, due to lack of substantial perimeter barriers.

And in January this year, an Etihad A320 collided with a wild boar when landing in Islamabad, the capital of Pakistan. Nobody was hurt (apart from the boar) but substantial animals like bears could do much more damage.

While it might not be possible to completely prevent aviation and animals mixing, the airport in Russia would do well to review its perimeter fencing. It was lucky that this was a daylight flight and that the crew were being observant because hitting something as large as a bear could have had a very grizzly ending.

Cold chain thrives after the pandemic